Physical and Vocal Training for actors/dancers 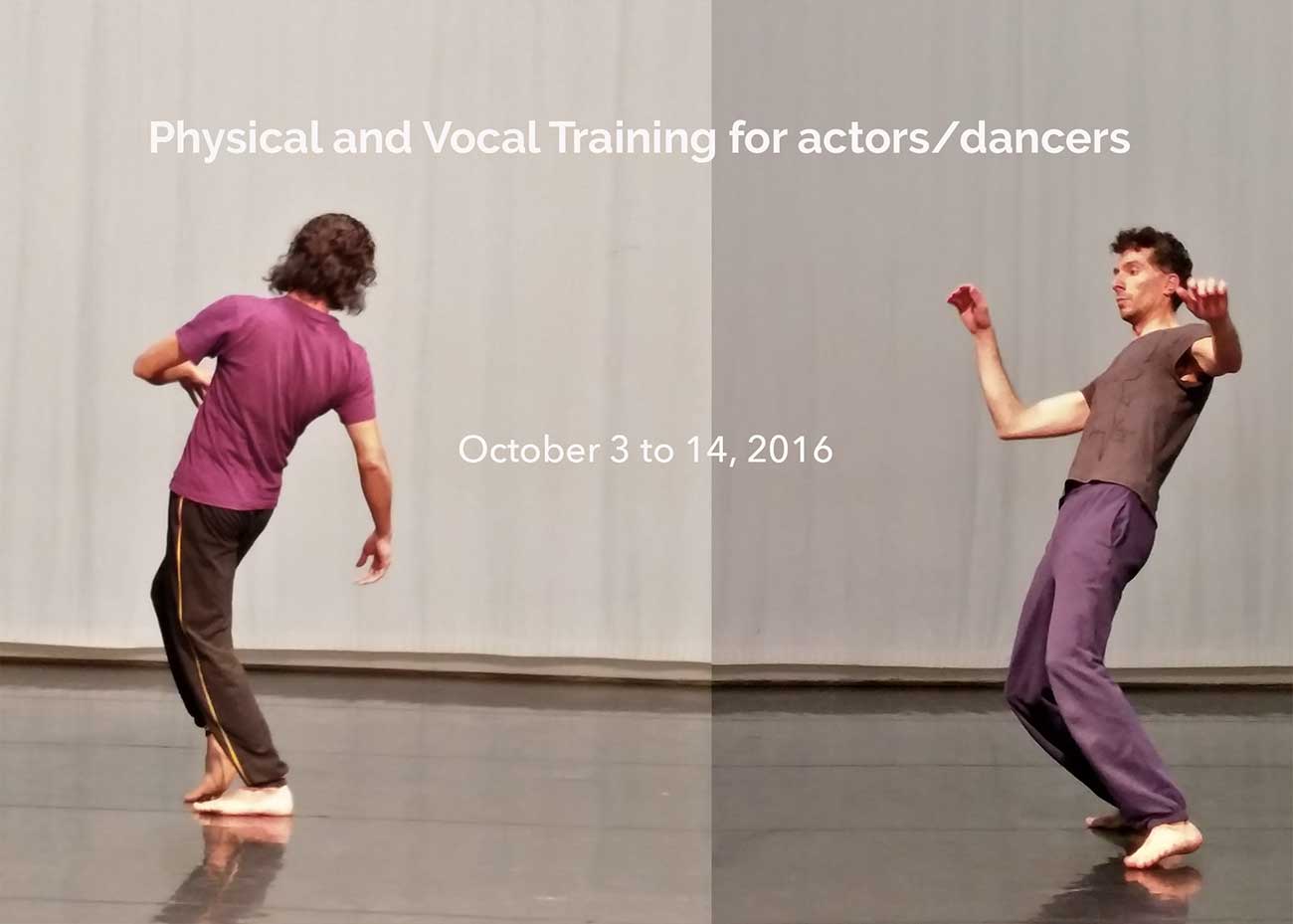 This workshop focuses on the development of the actor/dancer physical presence through Leela Alaniz’s method, derived from her 15 years of research and training with actors. This work is based, first, on exercises from The Organic Lineage of Jerzy Grotowski, second, on the Corporeal Mime technique of Etienne Decroux, and finally, on the meeting of these two methods so as to develop the creative autonomy of the actor/dancer.

The exercises of the organic process liberate the energetic flux from the spinal column, and propagate to transform the physical body. The actor/dancer thus develops a concentration and identifies with his physical, emotional and mental centers. In the practice of Corporeal Mime, the actor/dancer finds the possibility of creating his or her own personal compositions in isolating different parts of the body, in mastering its articulations, and in playing with varying speeds, resistances and designs of corporeal movement.

The work developed with rigor by Leela Alaniz responds to the understanding of one’s self by listening to the impulses, by the abandonment of stereotypical attitudes and systems, by the exploration of new ways of the body movement and by the discovery and respect for the inherent organicity of this body.

This workshop is open to all actors, dancers, musicians, puppeteers, professionals or amateurs.

Co-director of Cie Pas de Dieux, doctor in Theatre Studies at Sorbonne Nouvelle Paris III University, she conducted her dissertation entitled: “The Thinker Body, the Dancer Mind – The Actor in his Quest for the Lost Unity”, under the direction of Monsieur Georges Banu in 2014 and will published very soon by the L’Entretemps Ed., Paris. Leela Alaniz’s career consists of a constant round-trip movement between the practice and the theory of theater. With over 20 years of research in Theatre Anthropology in addition to 16 years of Corporeal Mime practice, she continues to teach many workshops and gives conferences in disparate countries and regions such as Brazil, France, Singapore, United Kingdom, Spain, Belgium, and Argentina.

After a double major in Physical Education and Theater Studies in Brazil, she received a scholarship grant to participate in UTA, a center of research for Theatre Anthropology in Brazil. In 1994, she founded and directed Casa de Artes BAKA, a multicultural arts center, for her direction and management she received the coveted SATED prize.

From 1997 to 2003, she studied Corporeal Mime under Thomas Leabhart in California and Paris, eventually becoming his assistant. In 2002, she went to France and undertook a Masters in Theatre Studies at the Paris VIII University. Her Master thesis on “The Dynamo-Rhythm of Etienne Decroux and His Successors” has been translated into English and published online in “Mime Journal”, Ed Pomona College (California), 2013, (for free download go to : http://scholarship.claremont.edu/mimejournal/vol24/iss1/2

Funding possibilities available through AFDAS (French nationals only). Contact us for more information.